Nastasia Zürcher is a young Swiss-Galician singer and songwriter. She is born in Geneva in 1988, but moved to Galicia in 2000. Already at a young age she started studying music, beginning with violin lessons and later singing lessons. In Galicia she attended a music school. Besides being a musician herself, she is a voice teacher as well. At Liet International 2018 XXL Nastasia is joined by Adrián Saavedra.

Galician in spoken by about 2.4 million people, and is an official regional language in the north-western part of Spain. 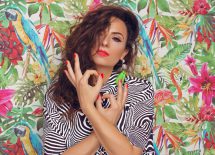